He was the original pianist for the Dixie Melody Boys when that group formed in 1962. He remained with them until 1964. He joined JD Sumner And The Stamps Quartet in 1965 where Sumner gave him the nickname "Tarzan." Brown released a solo piano LP in 1969 title "Tarzan" Tony Brown Plays Piano followed by a comedy LP with Sumner in 1970 titled JD Sumner And Tarzan N'Em Humor In Concert.

In 1971, the Stamps were part of the Gospel Festival USA tour. During that tour, Brown also sang in a trio with Greg Gordon and Reba Rambo billed as Charity's Children. Charity's Children recorded one EP on the Impact Records label.

After leaving the Stamps in 1972, Brown played piano for the Oak Ridge Boys. He joined Voice in 1975, a group that was part of Elvis Presley's entourage that Brown has described as Elvis' "house band." In addition to appearing at his concerts, Voice would make music with Elvis in his home or wherever he happened to be settled for a few days. In 1976, Brown was part of Elvis Presley's "Jungle Room" recording sessions at Graceland, and he also played piano in Elvis' TCB band after the departure of Glenn D. Hardin. After Presley's death, Brown toured with Emmylou Harris as part of her "Hot Band" from 1977 to 1978.

After his stint with Harris, Brown left the road and began working behind the scenes, first for RCA in 1978 and then for MCA starting in 1984. Over the next decade, he became one of the most successful record producers in Nashville. Brown is noted for signing acts like Alabama, Vince Gill, Lyle Lovett, Marty Stuart, Steve Earle, and Trisha Yearwood.

In the early 1990s, Brown became the president of MCA Records Nashville. 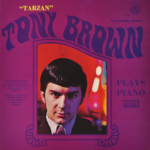 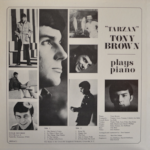 hi-res
1969 "Tarzan" Tony Brown Plays Piano (Sumar Records/SLP4305): The Master's Voice; O, When I Meet You; The Things That Matter; In The Garden; A Thing Called Love; Keep Me; Happy Day; The Fact; Just A Closer Walk With Thee; If You Find The Lord 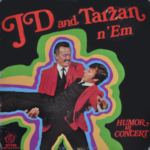 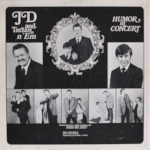 In The Middle Of The Night

All articles are the property of SGHistory.com and should not be copied, stored or reproduced by any means without the express written permission of the editors of SGHistory.com.
Wikipedia contributors, this particularly includes you. Please do not copy our work and present it as your own.